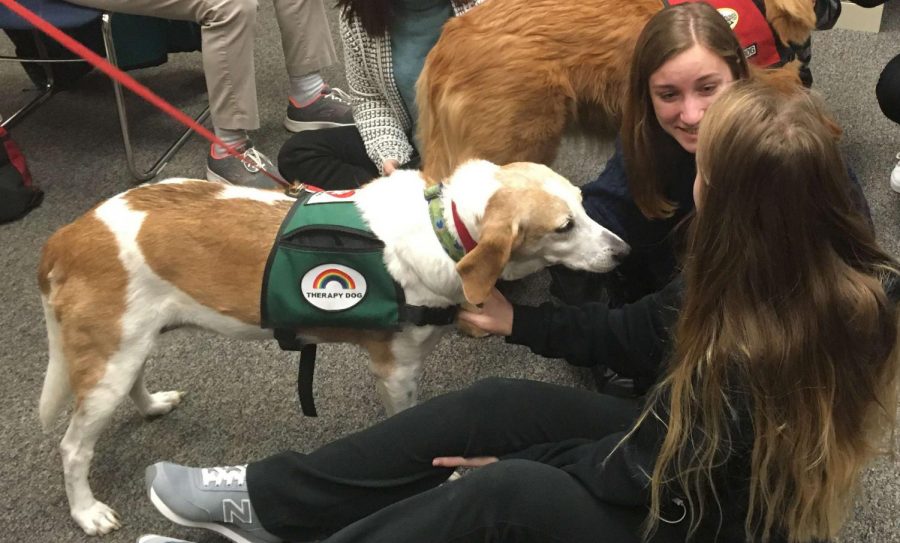 Midterms. A cringey word that haunts high schoolers after winter break. Midterms are a first semester cumulative test that students take near the end of January. Many students become very stressed trying to study and prepare for these exams because they count as one seventh of semester grades.
During the week of January 16th through the 19th, therapy dogs visited Riverbend High School to help kids cope with the stress of upcoming midterms and exams. The therapy dogs came through an organization called Blue Gray Therapy Dogs, they also came last year before midterms. Despite midterms being cancelled this year due to snow days, the dogs still came for the rest of the week and many kids were happy about the news.
The kids who signed up to visit the therapy dogs enjoyed spending time with the dogs. Jonathan Savage, a sophomore at Riverbend, said that he doesn’t have a dog at home so it’s nice to be able to spend time with some once and a while. “They [the dogs] were great and helped take away some of the stress of school and testing,” Junior Aspasia Sheppard commented. The goal of the therapy dogs is to help students relax from the stress of midterms and they were successful this year as well as last year. “I would say I didn’t feel as stressed as I was, but the stress was still there. The therapy dogs helped a lot though!” Savage exclaimed. Sheppard agreed stating that she loved being with the dogs because they made her feel less stressed out. It’s important for students to avoid burning out from stress and studying, the dogs help provide an escape and a metal break from all of this stress.
Many of the therapy dogs will visit hospitals or participate in library readings, so it’s important that they are well behaved, and coming to Riverbend is no different. “The dogs seemed comfortable with new people. They didn’t make noises or seem scared.” Sheppard observed. “When a person walked into the petting area, that person was greeted with nice calm dogs that were ready to be cuddled!” Savage explained. It’s important for the dogs to remain calm and to be ready to be petted. The dogs helped a lot and were such a positive experience that both Savage and Sheppard said they would come visit the dogs again.