Just twenty minutes from Riverbend, this past Tuesday, Caroline Ayers performed at “The Irish Brigade” and sang “Baton Rouge” by Marc Broussard. A meaningful song to her since both the singer and both of her parents are from Louisiana.
Ayers has always wanted to perform. She first started doing performances during her junior year, and said it was more difficult then. However now it comes easy to her, “I get nervous sharing with people.” She then discusses that once she is up on stage, she soon realizes, “This is where I need to be right now. This is what I do.”
Mr. Sylvester, who is Caroline’s school counselor, and was present at the performance the other day said “I was completely blown away.” He obviously has many students and he says, “I try to figure out what kids do outside of school. And I was way passed impressed with her performance.”
Not only does Caroline sing, but she also plays a few instruments as well. She started playing violin in sixth grade, but now does more fiddle playing with bluegrass bands. Caroline also plays guitar, and started when she was around thirteen years old.
Although Ayers is just doing performances at small establishments and restaurants downtown, she says that she wants to be more and eventually be on a bigger stage.
Caroline is a senior, therefore college is coming up and she wants music in her future. “I definitely want to go to music school, because this is what I want to do,” she stated.
One of Caroline’s friends, Alivia Deihr, who is also a senior, was at the performance Tuesday. She has gone to a couple of her performances before, and says “Genuinely, I believe that she is a very talented person, and deserves to be.” Every performance she goes to amazes Alivia. She further commented, “She doesn’t just sing; she puts on a performance.” Both women have known each other since sixth grade, and seeing her friend perform like this inspired Deihr to comment that, “Not a lot of people can go out there and achieve their dreams, and the fact that she can still do it and go to school is unbelievable.”
Caroline has many influences that inspired her to do her style of music. The Beatles, Bob Dylan, and Jimi Hendrix are just a few of the musicians that inspire her to perform. She also really likes the 60s and 70s and says, “In pop music we’ve kind of lost that curiosity that they had in music.”
This is Caroline’s dream and her true passion. She states that, “I always connected with music, so I just kinda started doing it.” As Caroline starts her senior year, there is no telling what great things are in store for this talented young woman. For her, the sky is the limit. 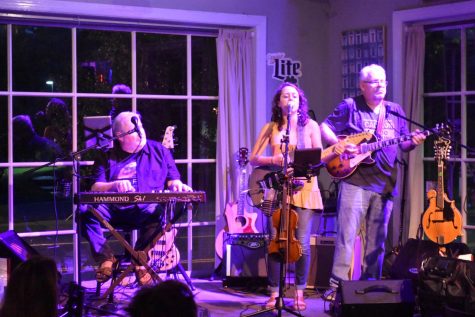