AROUND THE BEND • February 4, 2021 • https://rhsaroundthebend.com/2461/sports/riverbend-bears-wrestle-through-the-pandemic/

Riverbend Bears wrestle through the Pandemic 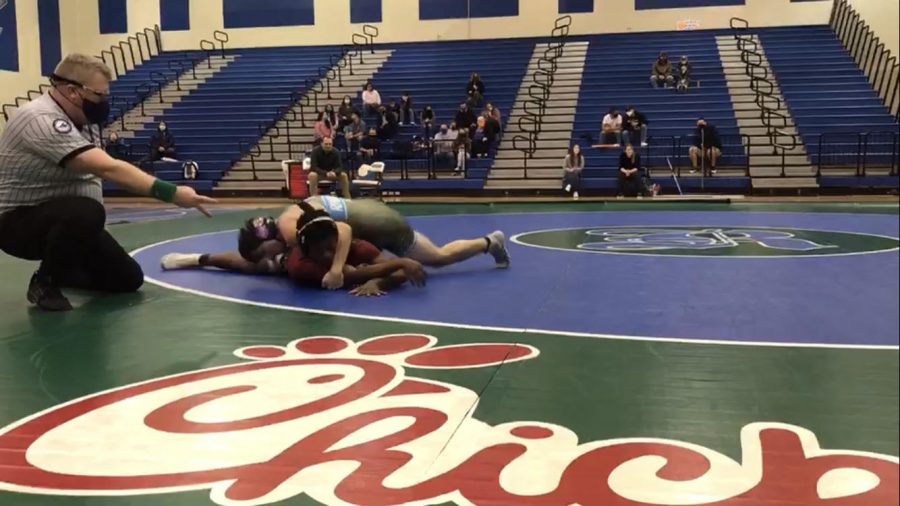 Nate Taylor wins his match at his senior night

With many school sports and activities being canceled due to COVID, few have been able to continue a somewhat normal season this year. Riverbend’s wrestling team is one of the sports that has been safely training for competitions every week. They’ve made significant wins so far this year against many schools including Mountainview and Stafford High Schools.

While being able to carry out their season, there have been considerable changes made in how the team practices. “It’s been very difficult because of COVID, our weight program just allowed us, midseason, to get where we need to be,” said Riverbend’s wrestling coach, Coach Roberts. “Usually in a season we have a month of preparation and this time we had two weeks of preparation.”

Some of these changes have allowed for a more focused and direct training session for each wrestler. “We’ve had to limit the amount of time wrestlers wrestle continuously, so it allows that to get in a little bit of recovery while we practice,” said Coach Roberts. “We clean everything and we haven’t been seeing a lot of cases this year.”

Even though the wrestlers face a season different from what they’ve ever seen before they’ve been able to achieve important wins this year. “We are wrestling very well right now and have made some big wins over our district opponents,” said Coach Roberts. “This year, we are one of the top teams in the state. Our goal is to win the region first and then make the state title.”

COVID has brought many changes to the season, but most of the wrestlers are excited to be able to do what they love. “I was really excited to find out that our season wasn’t going to be canceled,” said Nate Taylor. Taylor has been wrestling on Riverbend’s varsity team since his freshman year. “I was worried that I wouldn’t be able to compete this year, but I’m grateful that I was able to have my senior night.”

Although they’ve faced many different adjustments, the wrestling team has had quite a successful season so far this year. We’re excited to see them move on to states and make more wins to come.